You don’t have to look far for stories on how young people are willing to live on a sailboat rather than in an apartment if it means affording top-dollar cities like San Francisco. These stories suggest millennials are willing to live in minivans, under someone’s staircase, or even wooden crates if it means achieving urban nirvana. But do they? While it’s true millennials are moving in droves across the U.S., they may be targeting different cities than you think. To take a closer look at their most recent migration patterns, we used 2016 census data to explore the cities and states with the youngest new residents, where millennials make up the largest populations, and the cities turning into hot spots for international audiences. Check out the latest trends below.

Most youthful residents in America

Millennials may not be moving as often as the generations before them, but when it comes to finding the right work opportunities, they’re more than willing to pack up their desks for a change of scenery. One study found 85 percent of millennials were willing to relocate for a job, and 82 percent thought being flexible with where they lived was a necessity if they wanted to be successful. Thankfully, that doesn’t always mean they have to be willing to relocate to some of America’s most expensive states. New residents moving from out of state into North Dakota had the youngest median age on average: just over 23 years old. North Dakota is one of the best states for businesses, so its strong economic climate could be a part of the draw for millennials. Colorado, Iowa, Kentucky, and Nebraska also had the youngest median age range of new residents moving from out of state. And even if they aren’t quite there yet, some states are starting to trend younger compared to years past. The median age of people relocating to Louisiana was nearly 28 years old in 2016, a more than 20-month decrease from the year prior. Nebraska, Illinois, and Washington also trended younger with their newest residents.

Both ends of the age spectrum 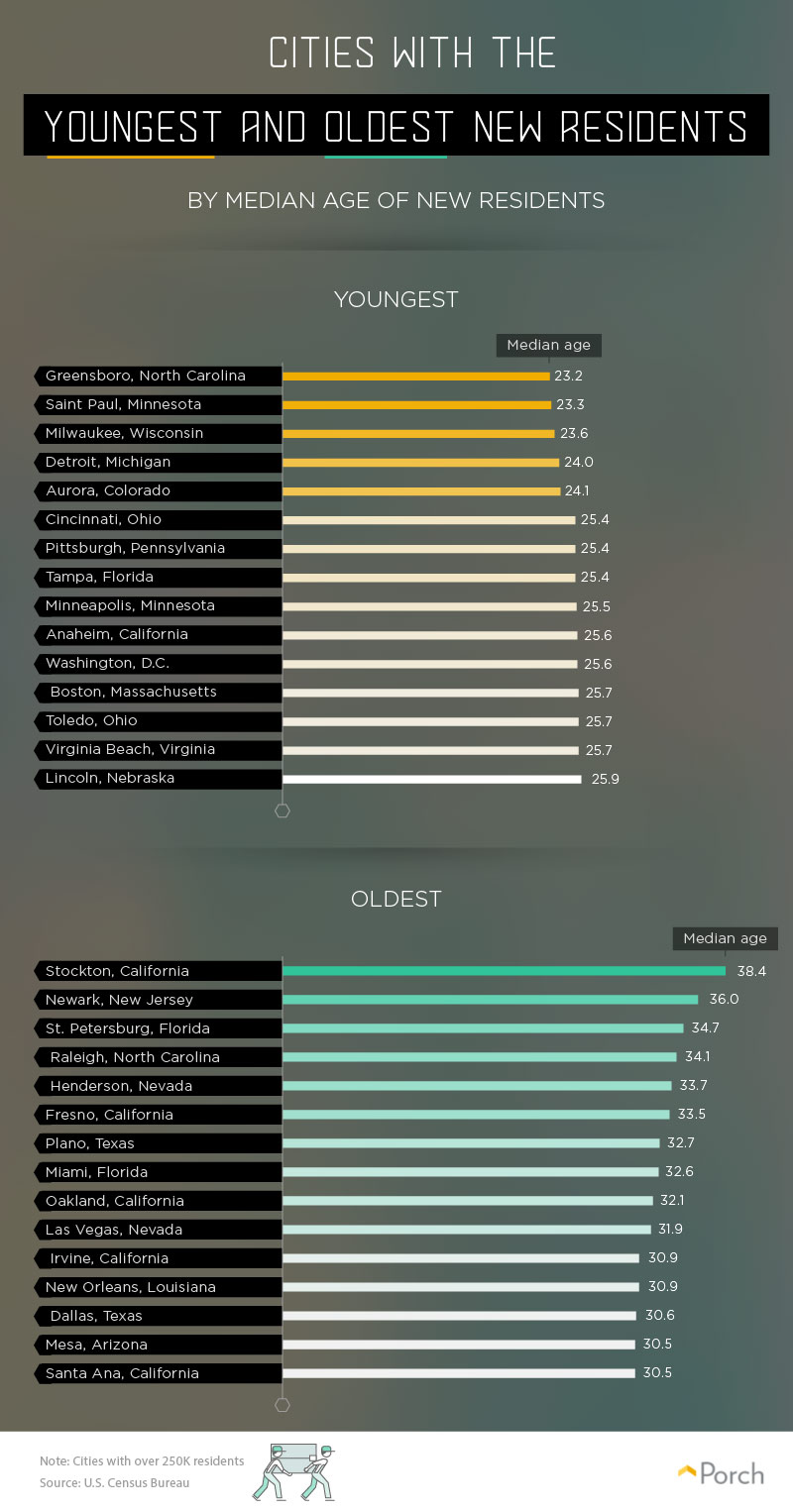 In years past, millennials may have wanted the true “big city” experience…until they realized how much it was going to cost. Now, the urban vibe is available in many more states, and businesses not being open around the clock may no longer be a drag for young people looking to relocate. Charlotte, North Carolina; Minneapolis, Minnesota; and Nashville, Tennessee—sometimes referred to as “18-hour cities”—are just a few places where millennials are finding the city atmosphere (and job opportunities) they want at prices they can afford. In 2016, it was cities including Greensboro, North Carolina; Saint Paul, Minnesota; Milwaukee, Wisconsin; and Detroit, Michigan, that had the youngest new residents—ranging from 23 to 24 years old. Cities like Greensboro are known for their metropolitan energy and thriving communities—and a below-average cost of living. Other cities could be experiencing the opposite effect though. Stockton, California; Newark, New Jersey; and St. Petersburg, Florida, had the oldest new residents, ranging from 34 to 38 years old on average.

States appealing to millennials on the move 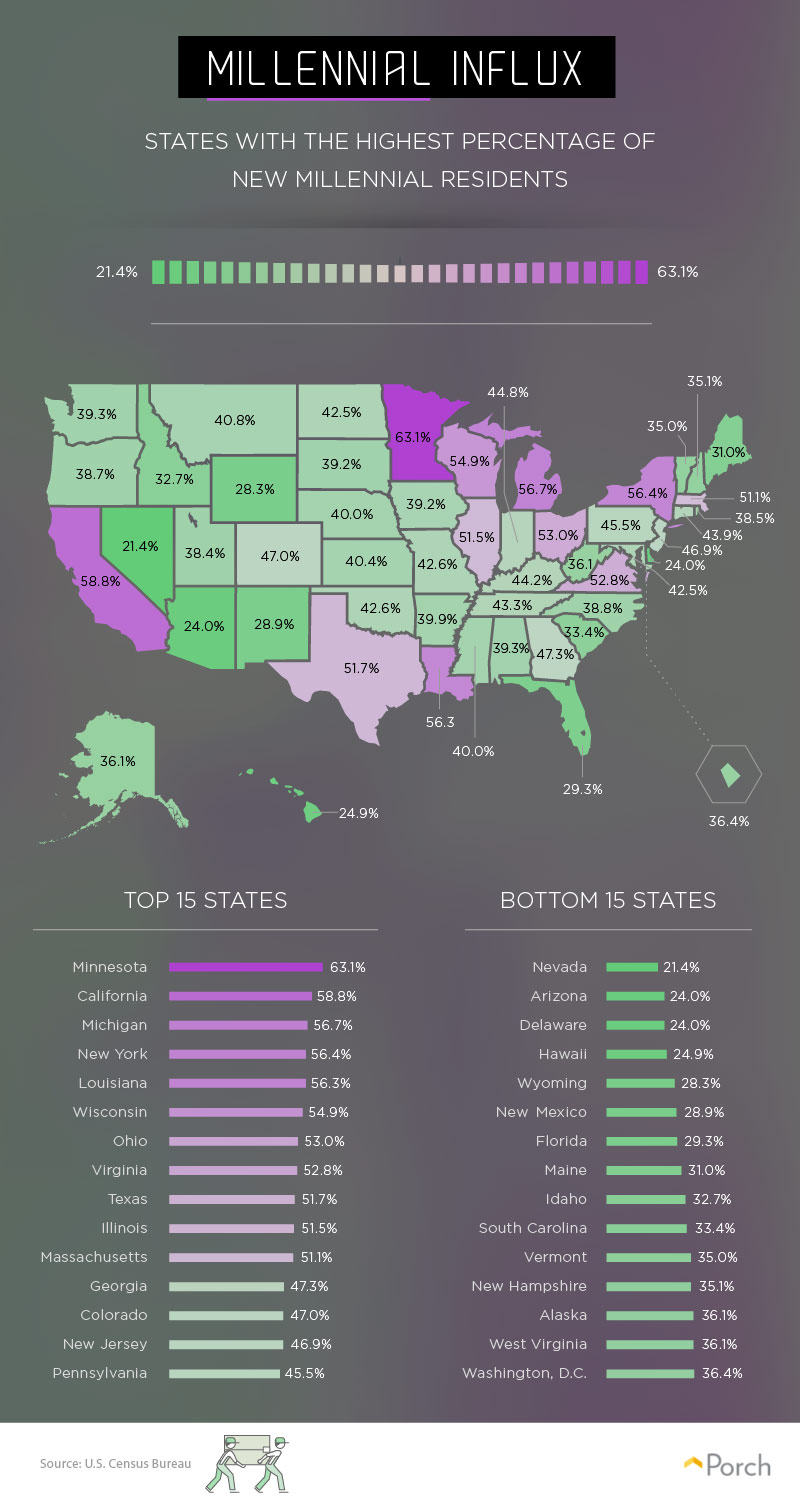 Despite skyrocketing costs of living and occasionally overcrowded living conditions, states like California, Michigan, and New York are still popular destinations for millennials on the move. But one state managed to beat them all for the highest percentage of millennial newcomers in 2016: Minnesota. It might get more than a little cold in this Midwest region, but Minnesota’s position as one of the best states in America for quality of life, a booming economic climate, and a strong metropolitan scene made it the premier destination for millennials in 2016. Louisiana, Wisconsin, and Ohio also ranked among the most popular states for millennials recently willing to relocate.

A different type of city life 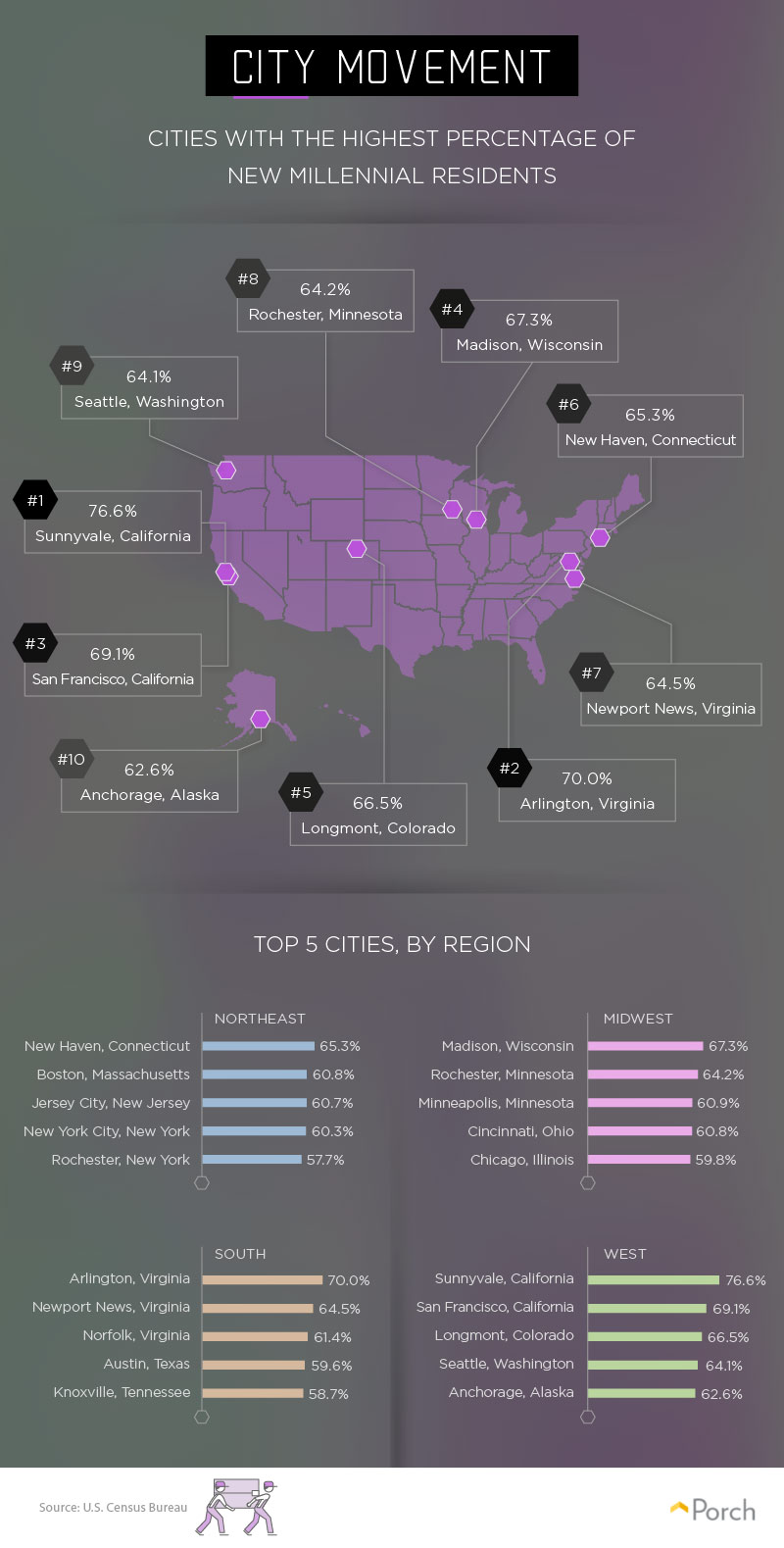 The go-to cities and states for millennials looking for job opportunities, community atmosphere, and even the scenic outdoors aren’t exclusive to a select number of overpriced locations. In reality, every corner of the country has its own pockets of younger residents who’ve helped imbue the best parts of urban life. Places like Sunnyvale, California (home to tech giants like Google and Facebook), still accounted for a vast majority of millennial relocations on the West Coast, but in the South, it’s a different situation. More than 70 percent of newcomers to Arlington, Virginia, were millennials in 2016, followed by nearly 65 percent in Newport News, Virginia, and over 61 percent in Norfolk. Virginia offers new residents plenty of opportunity for booming locals due to its quality of life and positive business growth. New Haven, Connecticut, saw more millennial movement than Boston or Jersey City, and Madison, Wisconsin, proved more popular than Minneapolis, Cincinnati, or Chicago. 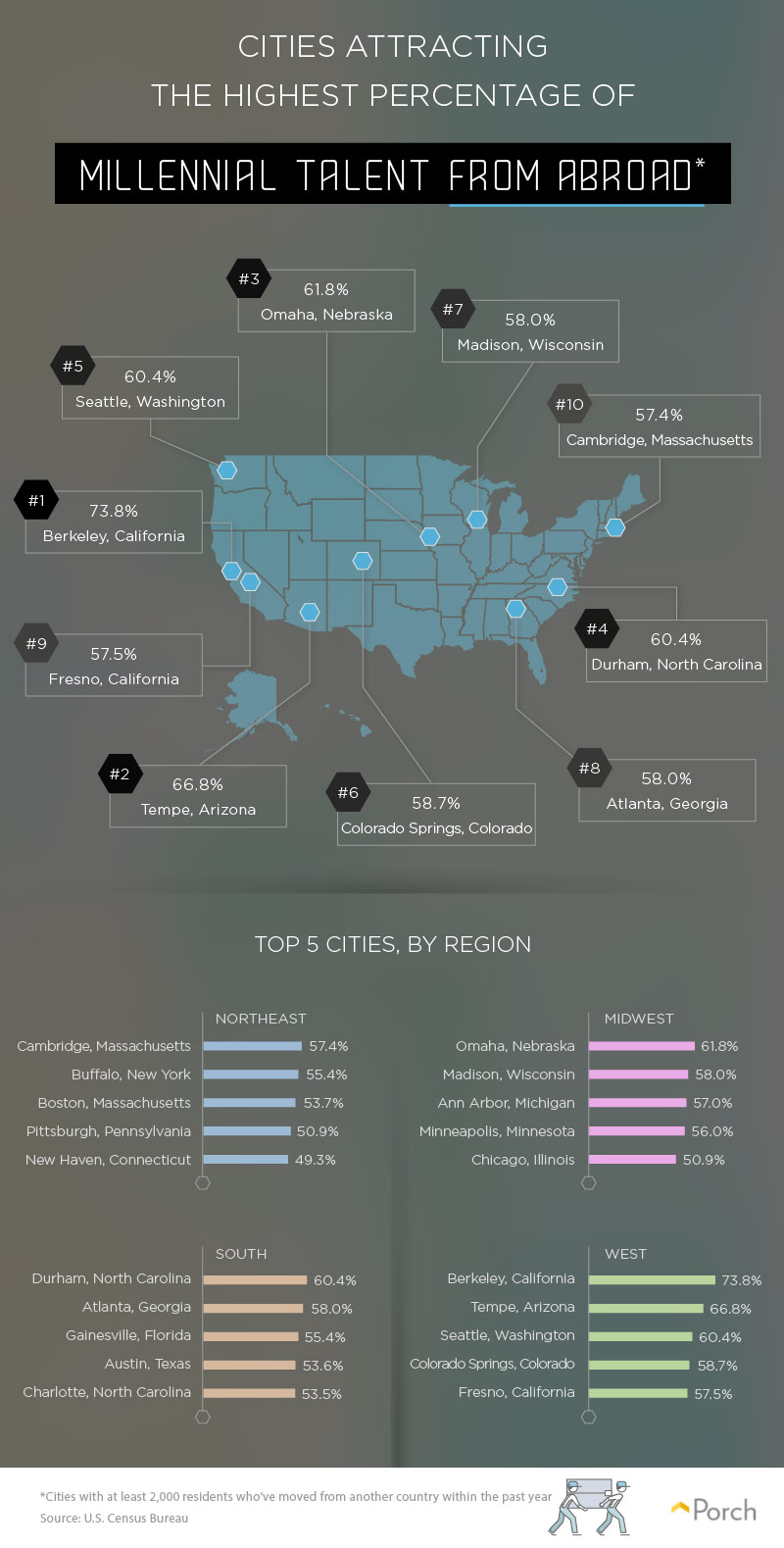 If there’s one industry that’s had a profound impact on migration patterns—it’s technology. While the cities and states enjoying a positive influx of residents and employees have continued to expand, even immigration into the U.S. is owed in a large part to the availability of tech jobs in popular regions. Millennials coming from outside the U.S. were more likely to land in Berkeley, California, than any other city in 2016. Berkeley—home to the University of California—is just steps away from Silicon Valley. Nearly 74 percent of new international residents moving to Berkeley were millennials. Tempe, Arizona; Omaha, Nebraska; and Durham, North Carolina, saw similar migration patterns from millennials in 2016.

Settling in, not settling down

Millennials may not be moving as often as generations before them, but they know having the best job opportunities can mean being willing to relocate—sometimes thousands of miles away. Instead of flocking to major metropolitan areas where the cost of living has exploded, though, young people are finding their urban communities in new and surprising locations. Cities like Omaha, Nebraska; Madison, Wisconsin; and Greensboro, North Carolina, are attracting millennials on the move and could eventually beat out cities like San Francisco and Chicago as go-to destinations for life and opportunity. Whether you’re just settling in or finally settling down, let Porch help you make your new house feel like a home. With our Home Assistant, you’ll have a personal support team available 24/7 to help you tackle your to-do list. By connecting you with our Porch Services pros or someone from the Porch Pro Network, you’ll have assistance for every kind of job—from replacing a window to mounting your new TV—when you need it. Learn more by visiting Porch now. This article originally appeared here.

GET A QUOTE
Go to mobile version
Skip to content